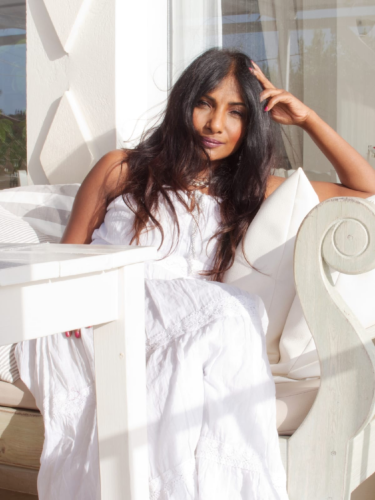 Following the rape and murder of the 8-year-old girl, Asifa Bano, in Rasana village near Kathua in Jammu and Kashmir, India, in January 2018, Sangeetha wrote a haunting poem about the plight of women in India, that went viral. It was recently published by Vidura, the in-house magazine of The Press Institute of India and by Mindsjournal.com, and she has been approached by a well-known Bollywood director to turn this piece into a public service message.

I am an Indian woman

I am the daughter of Kali, sister to Saraswathi and the embodiment of Lakshmi.

I am Mary Magdalene, I am the Virgin mother, I am Khadeeja, I am the mother of Buddha!

I was delivered through pain and that was just the start.

I am the woman who is beaten by her husband while friends look on. “I am too busy with my life to get involved,” they say.

I am the daughter too dark to be of merit to her own family, so I am denied a voice and denied choice.

I am the woman who is told how to dress. “Wear bright colours,” says my friend, the mental health therapist, with skin like driven snow. “Cover up your shame,” says the village.

I am a woman so I have many advisers to teach me how to think. “Don’t leave the country,” says my teacher, “you’re running away from work to be done here.” “It looks bad when women smoke,” says the doctor. “Have children, it will cure your acne,” says the old lady down the street. “Discolour your face to look pretty,” says Unilever.

I am the female accused of harlotry at the age of 14. No one says anything to the uncle – apparently as a girl and a child, the guilt is mine alone. They threaten to break my legs if I go near him again and so I am sent to a prison in my own home.

I am the woman trapped in an unhappy marriage that I cannot leave, for what will people say? I am the one that dared to leave her man and then found another. And when that too fails I force a smile and endure it for I can be a hero no more than once in this lifetime.

I am the woman that likes her own kind. And I swallow my fear and my secret as I see my matrimonial ad in a newspaper selling me to the highest male bidder.

I am the vulnerable guilty party. I am the thief in the house, says a male relative who listens to Tchaikovsky and has misplaced some silver I have never seen.

I am the girl who runs away at 18 to be with a man she has fallen in love with. And I am her girlfriend who is brought to trial for her treason for there is no one else to blame now.

I am the rebel who runs away from home to escape abuse. Everyone is shocked, but no one asks why.

I am the bereft wife whose husband picks his mother over me and leaves me to suffer the crushing and brutal aftermath of his unreasonable departure. I am the woman whose mother-in law threatened to pour kerosene over her.

I am the Indian woman who chose not to have children. Barren, lesbian, unfortunate, soulless, and worthless am I.

I am the successful career woman. Other woman who have chosen the norm treat me like a pariah, while taking all the generosity and benefits I have to offer. I am the subject of gossip, aversion and betrayal. Over and over.

I am the writer, the dancer, the poetess, the engineer, the fighter pilot. The hostess, the employer, the employee, the unpaid maid in the home.

I am the 12-year-old child-woman that goes to work in the houses of the wealthy. They have baby daughters, but to them I am just a machine to cook and wash and clean.

I am the woman in the slum, the one you see, but don’t see, every day. I am ‘these people’ to those whose accident of birth prevented them from living my life.

I am the girl that ran away from home to get married, and when things went wrong I had nowhere to turn to. Even renting a house, as a single woman, is fraught with terror, it seems.

I am a divorcee, and it is my only claim to fame, says the rich lady from Bombay. She forgets the jobs I have done, the books I have written and the friendship I have shown her. She thinks her tawdry affair is not a reflection of her married state.

I am the girl born in the slum. I am sick from dirty water all the time and I can only go to a toilet when the sun is still in the sky. I am her fearful mother who cannot let her out of sight for who knows what may happen to her.

I am the other woman, and I am forever in shame, for I sinned against all that is considered virtuous. The man escapes unscathed, and his wife blames me and not him.

I am the widow and I may not walk in sunlight for fear my unlucky shadow may fall on another soul bringing him or her misfortune.

I am the actress of stunning beauty and talent and my path to success is via the casting couch.

I am the struggling writer and I want to tell the story of India’s unsung women. “Your stories don’t have happy endings,” says the publisher. In the bitter ether of the online world, I send back a fervent message, “There are many in India who don’t get happy endings. Let’s give them one by telling their story.” Silence is my only answer.

I am the small-town rebel. I am the big-city conqueror. I am the woman that tries to find her way through the crushing onslaught of misogyny, patriarchy and injustice that block my every step wherever I go.

I am the woman on the bus and the train that your brother groped. I am the young girl your father leered at while speaking from the pulpit at church. I am the one your husband called out vile names to on his way back from offering flowers to the Goddess at the temple.

I am Nirbhaya. I am Sridevi, I am Malaika who spoke out loud against hypocrisy. I am the Rani of Jhansi. I am the women that Raja Ravi Varma painted. I am Arundhati Roy and I am the bai in your home.

I am the ten million girls that have disappeared in the last ten years.

I am the widow that dares to live. I am a financial burden to the family. Not deserving of nutrition or a decent education, for those are the purview of my brothers.

I am the ugly, dark-skinned female bearing the daily cross of my genetics and gender.

I am the one men fear and despise for I refuse to conform to their narrow standards.

I am female. I am Indian. My thoughts, my life, my soul, my body are not mine, but belong to my parents, my husband and a society that worships mothers and reviles daughters.

I am Shakti, I am Parvati, I am Mother Theresa, I am Indira and Priyanka. I am Jayalalithaa and I am the sweeper on the road. I am the forgotten wife of the Father of the Nation.

I am Asifa. I am the girl that went out in the fields to tend to her horses and never came back. I was the one that cried for my mother as I was drugged and pinned down by a policeman and his friends. By a man old enough to be my grandfather. I am her grieving mother and I am her neighbour. I am the lawyer that defends her, and I am every woman that is helpless in the face of this horror.

I am the one who cries out silently from behind a laptop for what else can I do.

My religion is submission. I have no voice, my power has been stripped from me by an inhuman social code and I have no recourse to justice.

I am an Indian woman. And I am raped every day.